The heart of the Show was the setting for the international final of the Rocketry Challenge: a rocket competition for youngsters aged 12 to 18.

Initiated by the AIA (Aerospace Industries Association) and the NAR (National Association of Rocketry) in the US in 2002, participants in the competition now include the UK, France and Japan.

GIFAS, with support from the Planète Sciences association, is seeking to promote the aerospace industry with young people through a fun, scientific approach.
At a time when the profession is highlighting problems in hiring engineers, this initiative provides an answer, with 400 young people (60 teams) involved in the project each year.

The Rocketry Challenge is an opportunity to develop international cooperation between industrial associations, AIA (US), ADS (UK), GIFAS (FR), and SJAC (JP), by creating an informal dialogue fostering connections.

In 2011, France hosted the international final of the Rocketry Challenge at the Paris Air Show for the first time. Since then, the event has alternated between the UK, at the Farnborough International Air Show, and France, at the Paris International Air Show.
This year the final took place on the morning of Friday 21 June during the Show. It has bring together teams of 3 to 10 pupils (young people aged between 12 and 18) who won their national challenge, from the US, the UK, Japan and France.   The competition consists of launching a mini-rocket, equipped with a parachute braking system for the descent, to an altitude of 230 m. It carries a raw egg on board, and the idea is to bring it down without breaking the egg! Participants will be judged on the quality of the launch (altitude and time), the condition of their egg on landing, and a presentation of their project to the jury.   In France, around fifty teams met up in Biscarrosse between 23 and 26 May 2019. High school students from the BARIL D’HUMOUR 2 of the Lycée Sud Medoc (AJSEP: Space Science Association for Young People) in the Taillan Medoc (33) region got through to the national French final and have thus be competing at the Paris Air Show on 21 June.   The four teams have launched their rockets from the Show runway and then met the French Premier Ministre, Edouard Philippe. Later they went to the Paris Air Lab stage in the Concorde Hall for the prize giving ceremony, held in the presence of some of the world’s leading astronauts, including Alfred Worden and Claudie Haigneré.


The team from Great Britain has won the first price. 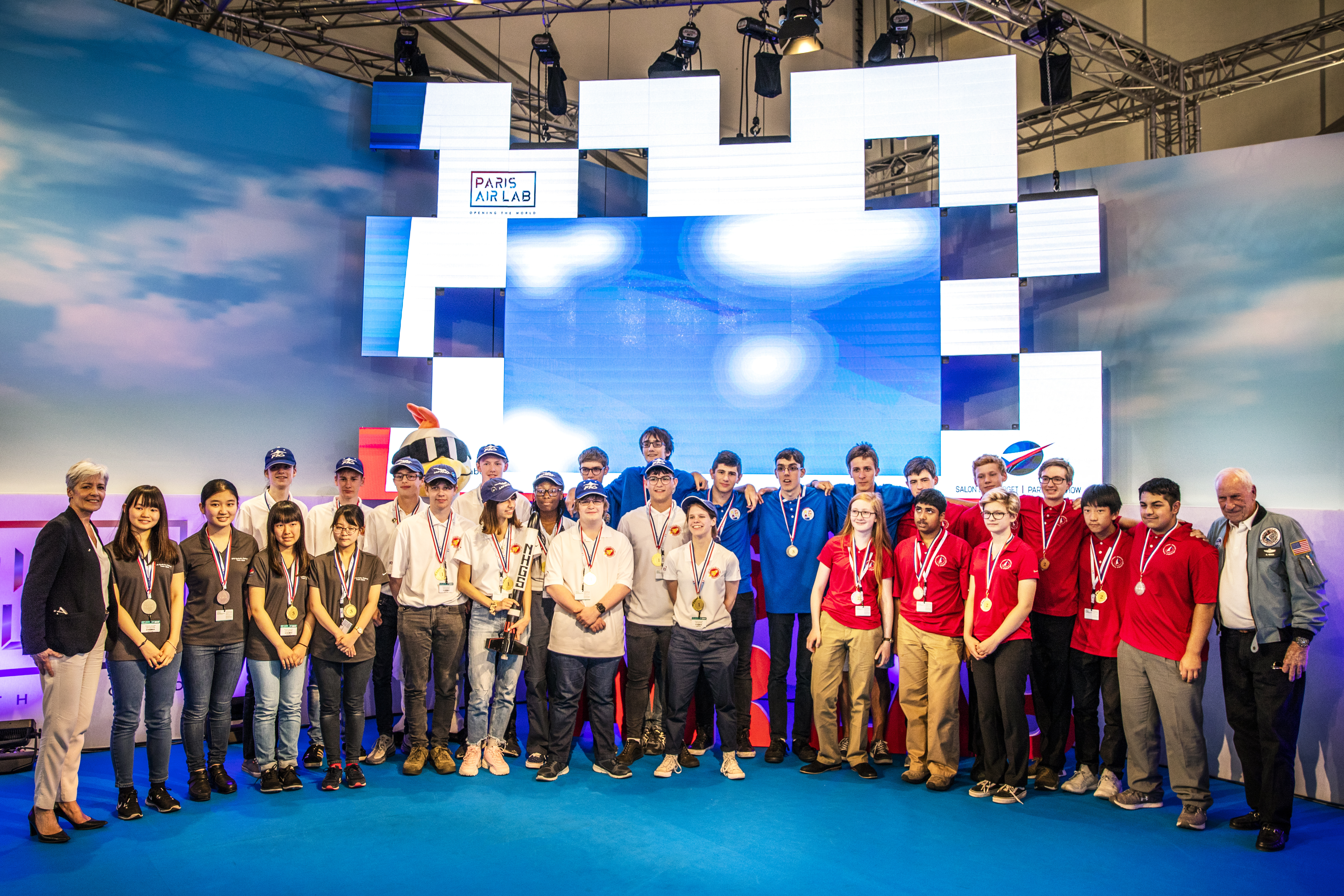 Where aerospace leaders
get down to business